The 2021 Australian macadamia crop is predicted to reach 50,770 tonnes in-shell @ 3.5% moisture (54,440 tonnes in-shell @ 10% moisture), according to a census-based forecast produced using scientific modelling developed by the Queensland Department of Agriculture and Fisheries.* 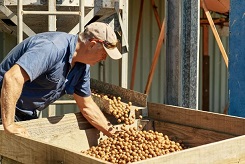 Australian Macadamia Society CEO Jolyon Burnett says this season’s growing conditions have been more favourable than last year, with some variances from region to region.

“Some farms are still being affected by dry conditions, but others are performing well,” says Mr. Burnett.

“Large growing regions, like the Northern Rivers, have experienced good rainfall over the season, and overall, nut size is bigger in most regions although thicker shells are likely to reduce kernel recoveries.”

Mr. Burnett says, in the largest producing region of Bundaberg, some varieties have experienced poor nut set compared to 2020.

“This is likely to be offset by young trees coming into production in the Bundaberg and surrounding regions.”

This model-based forecast is an early estimate and will be further refined as the harvest gets underway in the coming weeks and months.

A mid-season crop report will be provided in May/June 2021.

*The project ‘Macadamia Crop Forecasting’ has been funded by Hort Innovation using the macadamia industry levy and funds from the Australian Government.