The Sheppard family have been part of the macadamia industry in the Bundaberg and Gympie regions since 1989. For over three decades they have been involved in many facets of the industry from developing new orchards, managing large farms, contracting, growing nursery trees and macadamia processing (Goldmac Australian Macadamias). 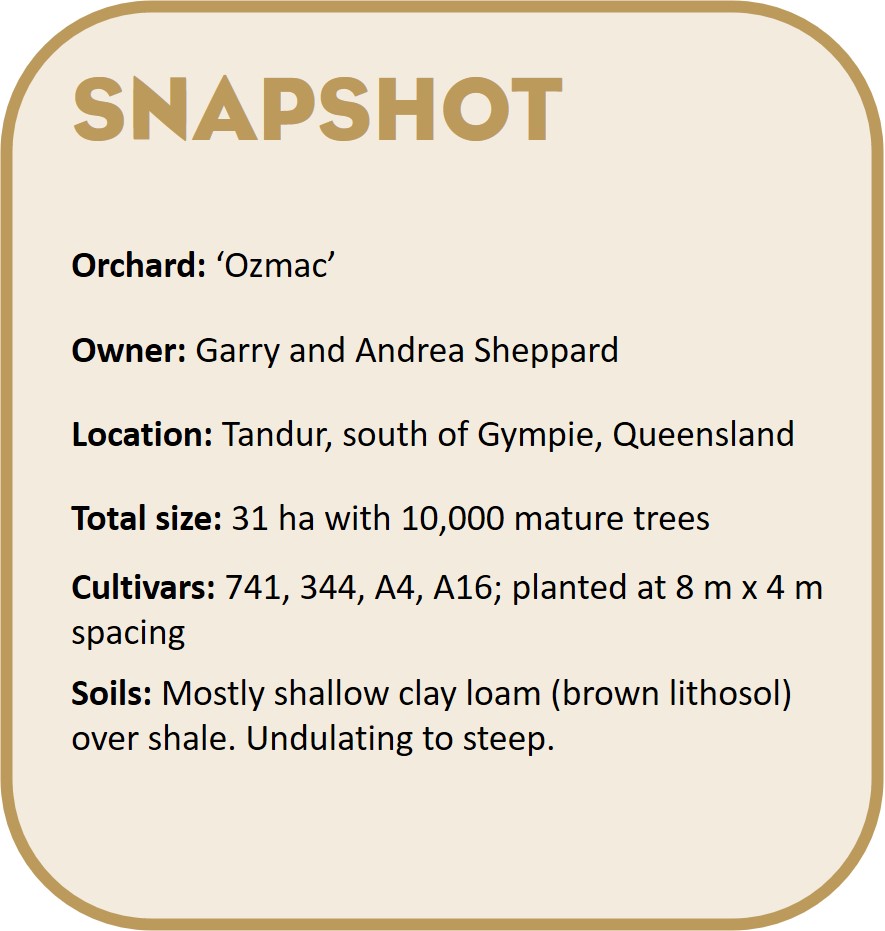 Garry and Andrea have won the 2020 Grower of the Year Award which awards the most productive and consistent orchard over a 5-year period. The farm won the same award in 2017 and has since been impacted by a number of hail and severe storms. Hail storms in November 2017 affected the 2018 crop volumes, and another hail event in September 2018 affected the 2019 crop. The 2019/2020 season continued to be a challenge with severe storms in mid-November last year that ripped through the area bringing torrential rain, hail and gusts of wind that twisted the tops out of trees. Dry conditions have prevailed for more than 2 years and this has been tough on the trees.

“The extremes of weather have been a real challenge. We are now applying a lot of compost and have treated every tree with a Phos Acid truck spray in August this year.”

As Garry and Andrea are based in Bundaberg, and Garry is away a lot with the contract pruning business, the farm has been fortunate to have consistent staff with Randall and Karen Couch working on the farm for the past 25 and 23 years respectively. “We are very lucky to have Randall and Karen here, we couldn’t do it without their help,” said Garry.

Regular pruning is a major contributor to the consistently high productivity of this orchard. The pruning regime has been ongoing since the farm was purchased and the aim is to prune about 25% of the orchard per year, being mindful of the tree health and weather conditions at the time and never pruning too hard. Most pruning and skirting is done with the Afron mechanical pruners Garry uses in their Austmac contracting business, however, the plan is to also do some limb reduction in the Hawaiians with cherry picker and pole saws.

Most blocks are pruned by doing either a low or a high cut on alternate rows every other year. This year however, only a light pruning was done in the Hawaiians as the orchard had already been opened up by the storm and the flowering was very light. “‘Natures pruning’ was one small positive outcome from the storm and helped get a lot of light into the orchard,” said Garry.

Garry considers the management of each variety individually and only prunes where necessary. “I like to leave the outside rows and ends unpruned if I can, and using small gear means I don’t need to prune for access every year.” 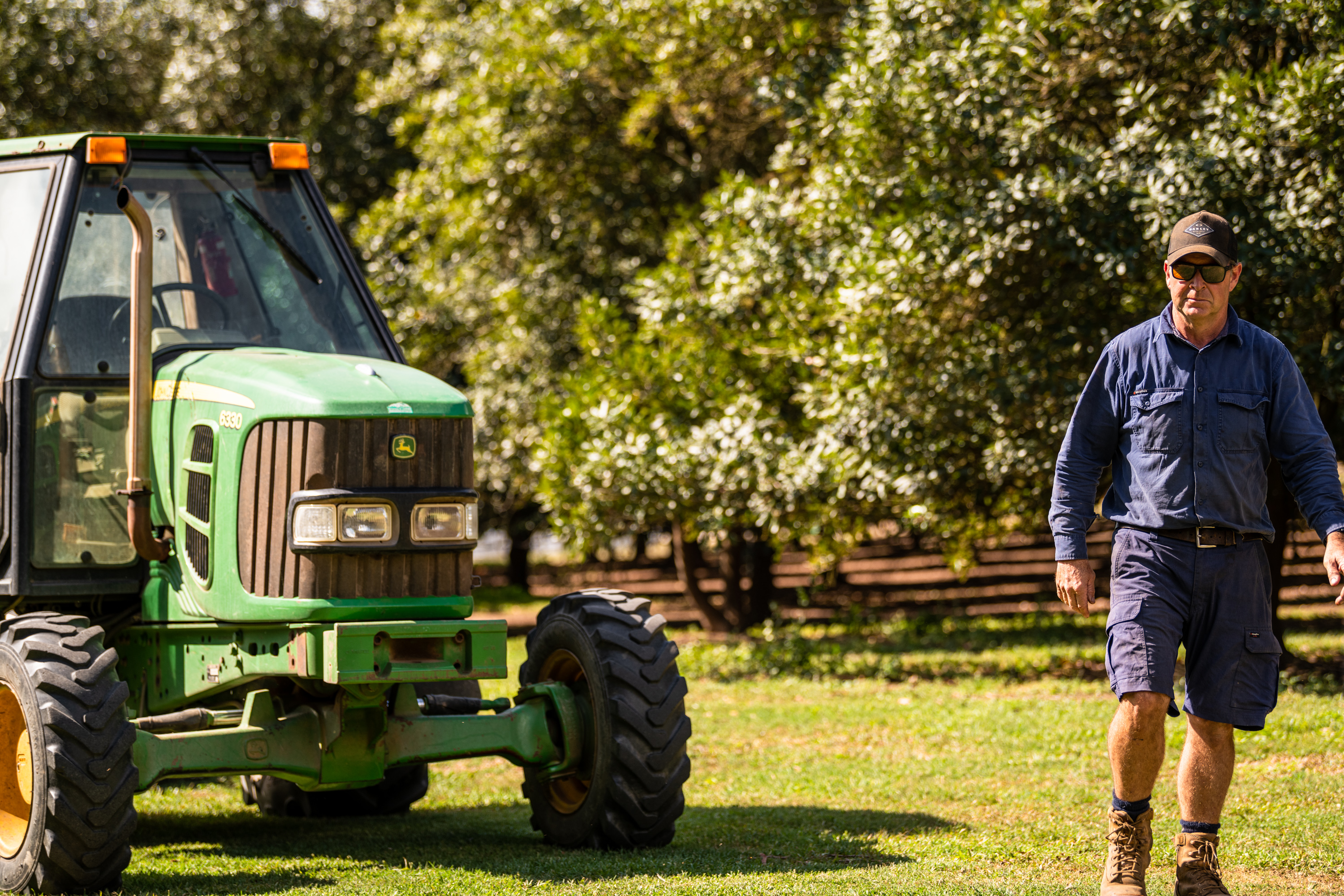 Running low profile tractors such as the Antonio Carrero and smaller orchard tractors with low profile wheels has a lighter impact on the orchard floor and reduces the need to prune for access. “It’s best to have the machinery to fit the orchard, not the other way round,” said Garry.

“We have shaken for the past two seasons on this orchard and I plan to shake them all again next season and use Ethrel as well on the As if the conditions and tree health are right,” said Garry. After first shaking in 1996 through to 2009 on the Wingfield orchards in conjunction with CSIRO trials, Garry has full confidence in tree shaking and doesn’t see any ill affects to tree health, as long as you have a well set up and maintained unit and an experienced operator. Their plan, starting from the nursery, was always to grow the right type of tree with mechanical harvesting and tree shaking in mind, ideally with a single leader and the first branch around 800 mm off the ground.

For harvest, a Weis-McNair self-propelled sweeper sweeps out into the centre row then a Weiss/Ramacher harvester will pick up the bulk volume of nut-in-husk and is followed by a Monchiero which does a final mop-up.

Water is the most important factor in being able to grow a good crop consistently in the shallow soils and hills of Gympie. The orchard has been irrigated since planting, but a major upgrade was done after purchasing the orchard in 2017 which included replacing all the sprinklers to 90 L/hour sprinklers. In a normal year around 600 L/week/tree is used at peak moisture usage, but with the dam almost dry they are down to just 150 L/tree/week this season. They are installing MAIT and G-Dot moisture sensors to help with future water usage and irrigation scheduling.

A large dam used for irrigation was cleaned out this year while water levels were very low and this will allow for an additional 10 ML of storage in the future. “Water security is going to be our focus coming into 2021 to secure more storage and supply,” said Garry. 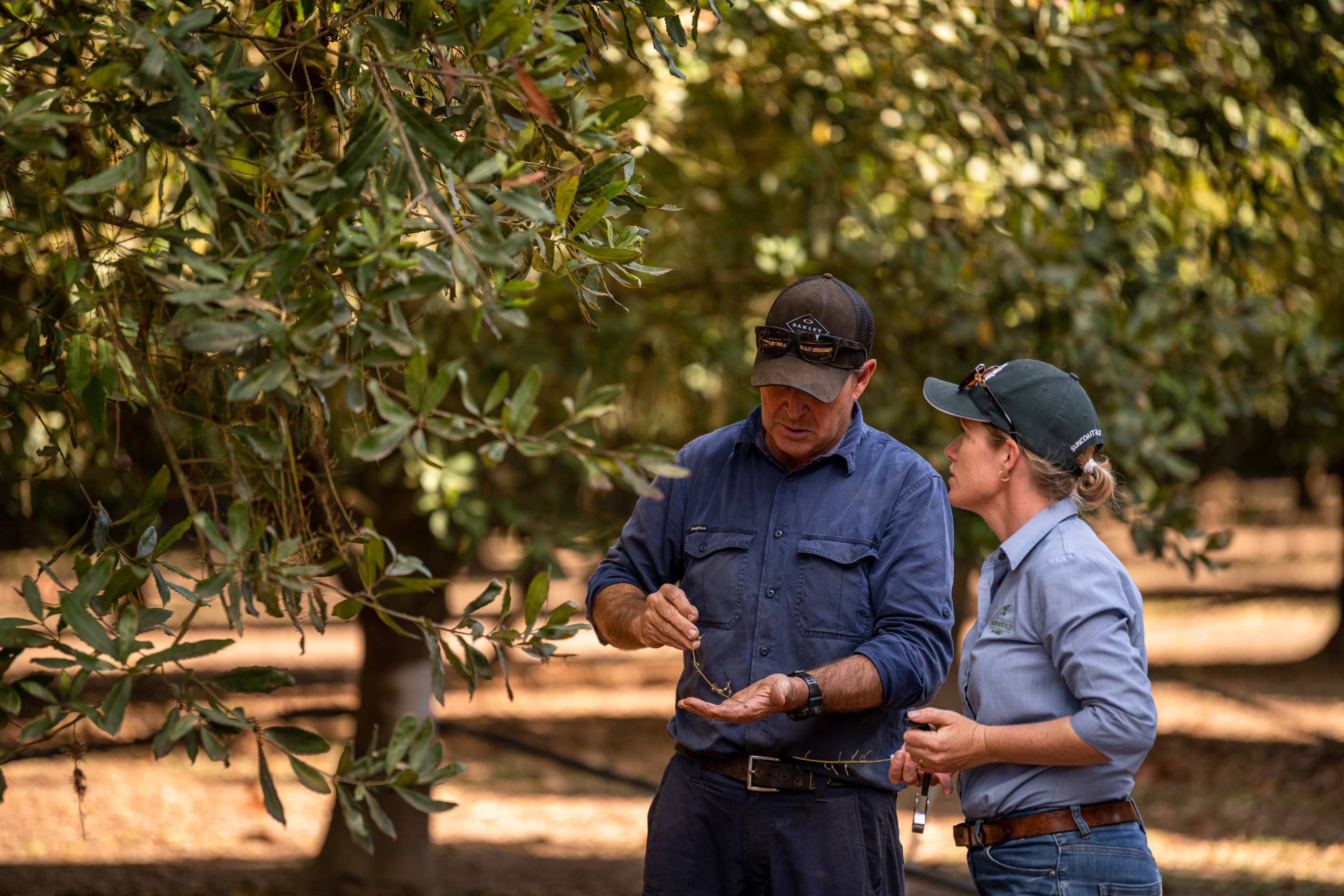 Garry has been accumulating product from a range of different sources to make compost on site from chook and feedlot manure, husk, pine bark, mulched branches and cut grass from the farm. This was mixed with silt from cleaning out the dam and then hilled up into windrows about 2 m tall to age.

Care is taken to always keep dust to a minimum around flowering. Large numbers of honey bees are brought in every year and Garry minimises spraying around flowing time when bees are active. The As have cropped very consistently and these varieties are a contributing factor to the high productivity of the orchard, and will be into the future. “The As have been very good for us and this year the A4s are the best I have ever seen them, touch wood,” said Garry.

With their contract pruning business growing each year, a new farm in Gympie recently planted with 8,000 trees from their own Bundaberg nursery, and plans for a further 8,000 trees in early 2021, Garry and Andrea’s passion for and commitment to the macadamia industry is clear.

Congratulations to Garry and Andrea on winning the 2020 Grower of the Year!